Bylaws of the
Association of Latina and Latino Anthropologists
June 1, 2011
A Section of the American Anthropological Association

Inherent in the philosophy of the Association of Latina and Latino Anthropologists (hereinafter called the “Association”) is the recognition of Latino contributions to anthropological knowledge and its application.

The Association is organized to provide educational services and activities in furtherance of its goals to:

The purposes of the Association are:

To foster pluralism and diversity and comparative perspective in the discipline through recruitment professional development, and support (including scholarships and mentoring) for Latina-Latino anthropologists;

The place and date of the Annual Meeting shall be disclosed to Members not less than one hundred twenty (120) days in advance of the meeting.

It shall be the duty of the Executive Committee to select a Program and Local Arrangements Chairs, and to work with them in planning the Annual Meeting.

A quorum for a business meeting shall consist of five percent of the membership in good standing.

Four members present shall constitute a quorum of the Executive Committee meeting.

The business of the Association at the annual business meeting shall be transacted by a majority vote unless otherwise provided in the Bylaws.

The referendum may be conducted by mail ballot, electronic mail, or any other means of electronic transmission at any time upon initiation of the Executive Committee of the ALLA, or upon receipt by the Secretary and Treasurer of a petition signed by ten members or five (5) percent of the members in good standing whichever is less.

The fees for members and Institutional Subscribers shall be set by the Executive Committee. Be sure to register before Friday for this month's Mapping Academia discussion "How to Publish an Article"! 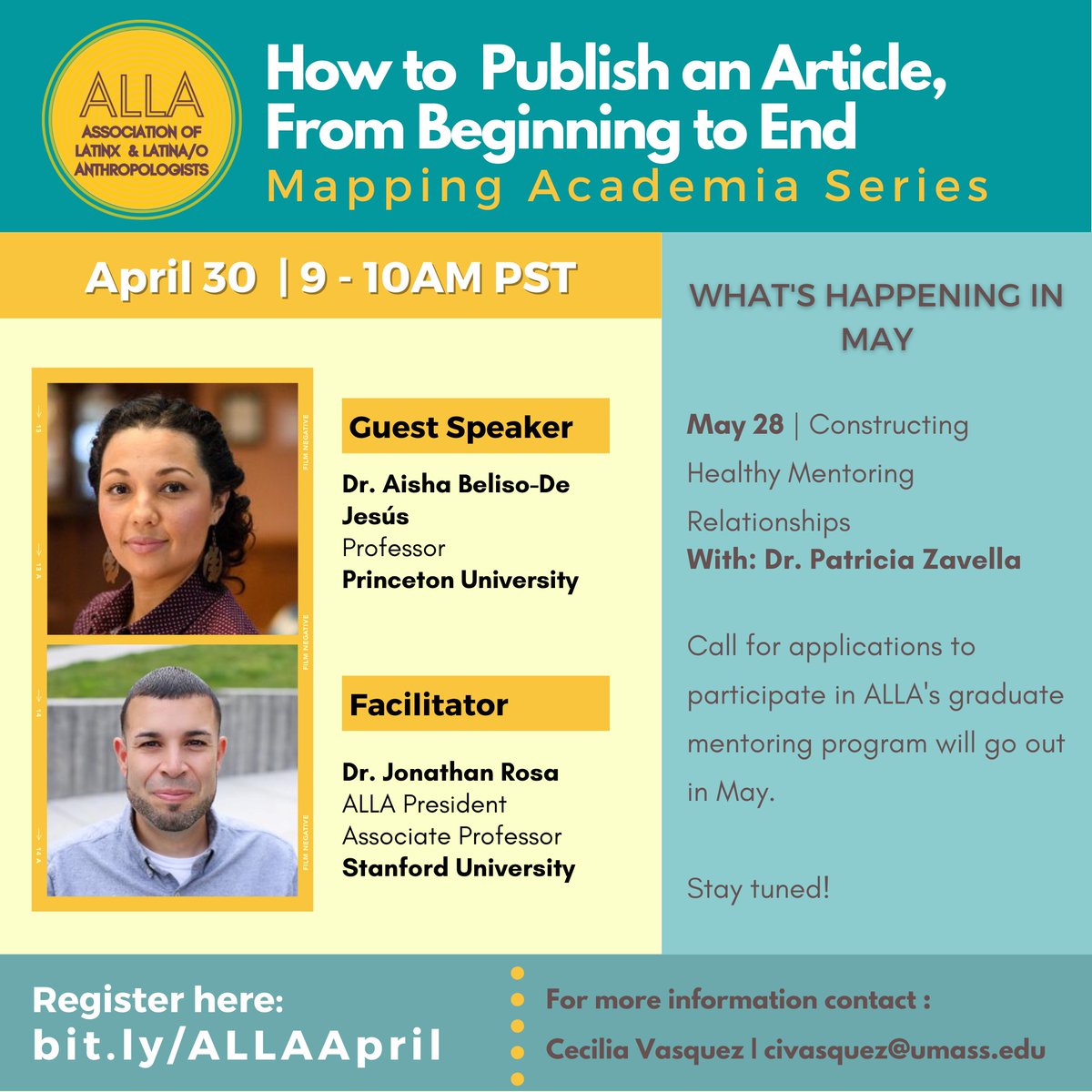 ALLA @AnthropoLatina
Be sure to register for our next installment of the Mapping Academia Series: How to Publish an Article, From Beginning to End!

Be sure to register for our next installment of the Mapping Academia Series: How to Publish an Article, From Beginning to End!

Be sure to register for this event, it is not too late! https://t.co/KGwaAssXEM
View on Twitter 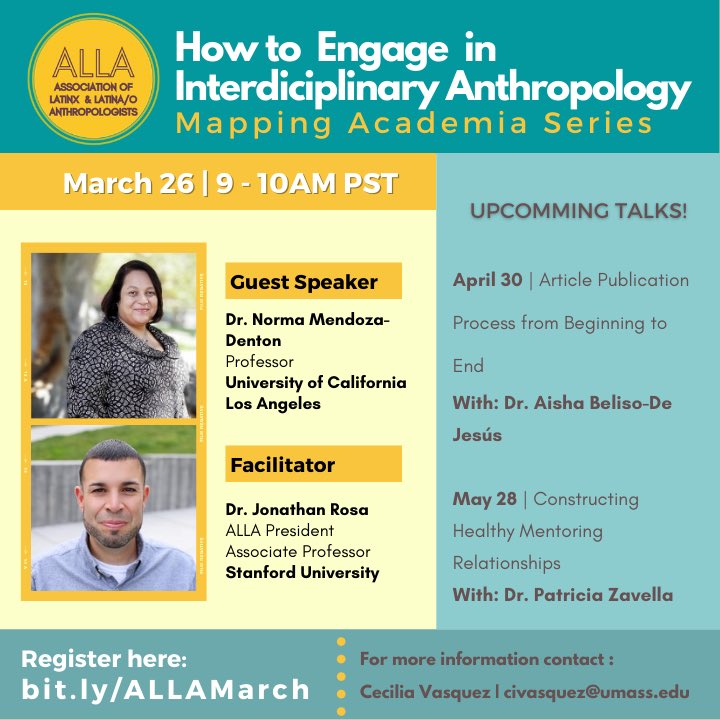 Jonathan Rosa @DrJonathanRosa
Please join @AnthropoLatina on Friday, March 26 for a dialogue with THE @normamd8 focused on strategies for engaging in interdisciplinary anthropology as part of our Mapping Academia mentoring series! Register here: https://t.co/dg2bJWdgFN https://t.co/IGw0IbWYaB
6
7

The Dean of Social Sciences at @DukeU invites applications for a one-year residential postdoctoral fellowship focused on race & sports. The fellow will be appointed in one of four departments: Cultural Anthropology; @DukeAAAS; @DukeGSF; or Education 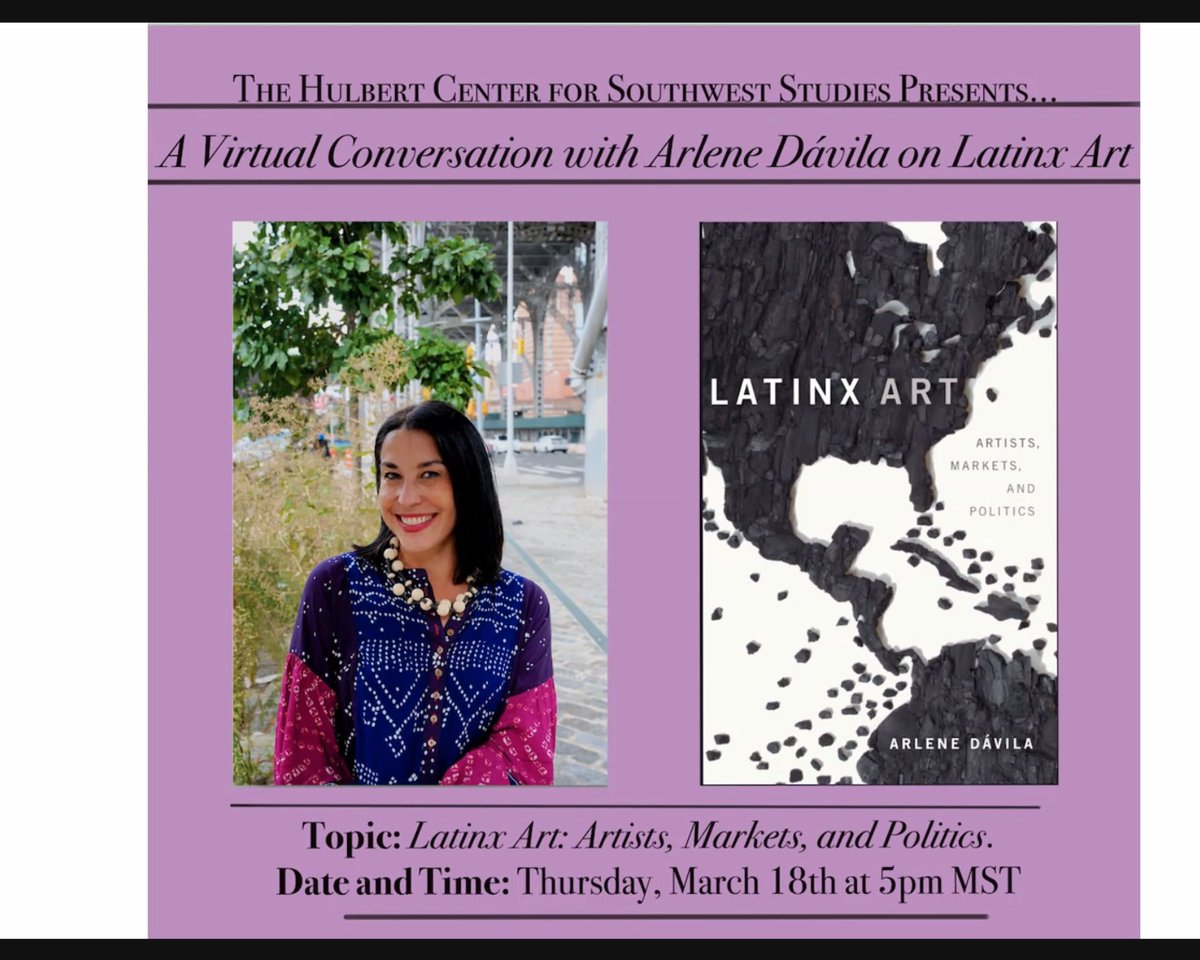